Last year a unique situation occured that allowed us to verify the comb spacing and cell size claims made in regards to naturally built comb. We hived a swarm while short on frames, by the time we returned it had prolifically built a few large combs extending into a second brood box. We added frames to the sides but left the wild combs on the inner cover all season. 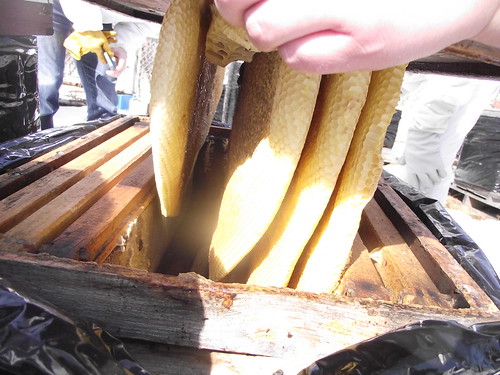 The comb spacing on the Hoffman frames typically used in the langstroth hive is about 35mm (1 3/8") and the cell size of standard foundation we use is 5.4mm. A quick glance at this hive was enough to make me feel the bees had decided on a much tighter spacing in some areas of their comb than our frames provide. Unfortunately, the hive didn't make it through the winter, but this did give me the opportunity to measure a comb design little influenced by top bars, frames, starter strips or foundation. The portion of the comb measured in the photo above is indicated by the white square in the following photo: With cell size it is often suggested to measure ten cells across and average the result, as bees tend to build cells of variable sizes. The following was measured in the lower-mid section of brood comb. I've heard many claim that bees coming from a hive with standard foundation will build 5.1mm cells in their next generation of combs. This experience seems to confirm that.

It is of course important to remember that comb spacing varies according to use. With honey and drone combs being wider than brood combs. The spacing used in a standard langstroth hive is really an attempt at averaging out the differences. I've been contemplating what frame spacing to use all winter while building hives for next season. Though I've seen the langstroth spacing work well enough, I'm tempted to see what advantage may come from using a variable spacing. It's become popular in the top bar community, where one can not rely on foundation for straight comb, to use 32mm (1 1/4") for the brood nest and 38mm (1 1/2") for honey combs. There is a great deal of speculation about the advantages of small cell bees and a corresponding tighter comb space. For me, the fact that bees seem to want to build cells and comb at various sizes when given the chance, seems like reason enough to set up the hive in such a way as to make this possible. Wish me luck.

Do small cells help bees cope with Varroa? A review

In 2011 David Heaf put together a fairly comprehensive review of different scientific studies on the usefulness of using small cell comb as a varroa control. While a few studies found positive results, particularly when africanized bees were used, the majority of the studies did not find small cell beneficial against varroa. Of course some questions still remain.

Study by Giancarlo A. Piccirillo and D. De Jong of São Paulo's entemology department which found a high correlation between cell size and mite reproduction in africanized honey bee hives.

Excellent lecture from Sam Comfort covering his past with the commercial beekeeping industry and why he started keeping top bar hives.

18 minute video tour of two apiaries in the Hudson Valley