The classic, and still the most definitive text on the subject is 'Swarming Its Control and Prevention' by L. E. Snelgrove.

Snelgrove's recommended approach to swarm prevention involves keeping lots of space in the brood box for the queen to lay. Once queen cells are observed, his strategy involves separating the flying bees from the house bees. To achieve this separation, he designed what is now called the Snelgrove board, a simple yet clever piece of equipment that allows you to divide bees within the same hive.

The result of using a Snelgrove board is basically an artificial swarm or split, however, his approach allows for a little more flexibility, particularly if increases are not desired and you plan on recombining the split later. On the downside, you do need to spend a little time opening and closing entrances a few different times over the course of a number of days. If you don't want to bother with Snelgrove's particular technique you will still benefit from reading his book as it is provides a comprehensive look at honeybee reproduction behaviour, and how beekeeper interventions can alter their behaviour.

In addition to his own method, the 112 page book also provides the authors opinion on the pros and cons of other swarm control approaches.

Caution. Those tempted to avert swarming by the destruction of queen cells should pay special attention to the comments on pg. 57 of Snelgrove's book. He observed that after queen cells are destroyed one may find new capped queen cells as soon as four days later since the bees may use existing young worker larvae to replace the damaged cells.

This blog post on swarm prevention by Michael Bush is another quick and simple explanation of the behaviour leading up to a swarm and what you can do to prevent swarming.

Essentially, Mr.Bush is also all about keeping the brood box open and giving the bees enough space up to the point where you see queen cells. You need to keep an eye out for backfilling. This means checking if the size of the brood nest is diminishing as a result of the colony filling cells where brood has emerged with nectar. As an example, the following photo shows a large section of nectar in the middle of a brood frame 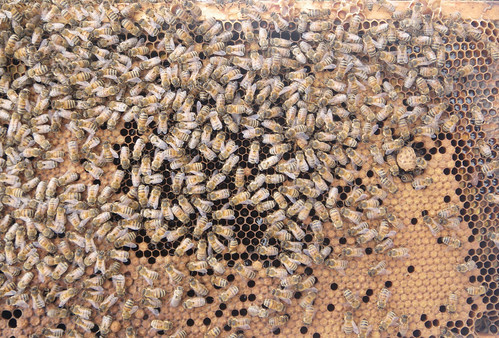 Keep in mind that you may see a similar behaviour during an intense flow. The bees may initially store nectar quickly in any available cell. They will then move it up above the brood shortly afterwards. So some nectar near brood isn't necessarily anything to worry about, but If they don't move it upwards, then you should expect queen cells are coming.

Tips. You may also want to consider if there's anything you can do to help the bees cure the nectar into honey faster (As moisture is evaporated from nectar it requires less storage space). Many will tell you to increase upper ventilation during a flow, while a few might tell you otherwise.

If the bees are backfilling during the reproductive swarm period, it is suggested to create space in the brood nest itself. Simply adding honey supers may not be enough as the bees may need more brood space rather than honey space.

Once you see queen cells or eggs in queen cups, decide if they are swarm rather than supercedure cells. As I keep hives in urban areas where a swarm can be particularly unwelcome by neighbours, I tend to error on the side of caution and always assume it's a swarm cell. 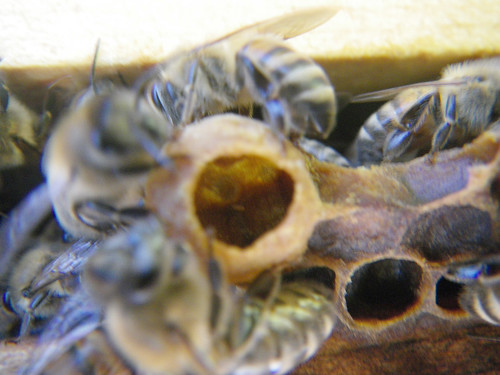 Caution. Once swarm cells are laid in, splitting, or artificial swarming, is the most effective recourse remaining to prevent a swarm. At this point it becomes extremely difficult to change the plans made by your colony by simply destroying cells and adding more space. The older the age of the developing queen the harder it will be to change the colonie's mind.

Here's a video of a Michael Bush giving a lecture on the subject: